Am I driving less aggressively or something?

Posted by Curtis in Android, Technology 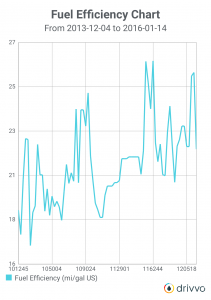 There is a clear increase of fuel efficiency over time.

I’ve tracked my fuel consumption using wonderful Android apps since mid-2012.  I’ve never missed a fill-up in that time, during which I have owned 2 cars and borrowed one from my parents.  I have gathered some very interesting statistics, some of which are rather surprising.

Firstly, this is a chart from my latest car, Maxine, my beloved 2003 Nissan Maxima SE (automatic, unfortunately…).  I can explain the drastic spikes and troughs pretty easily:  spikes are during long (10-hour type) trips where I travel along highways at 60-80 mph the entire distance, and troughs indicate where I drove a daily commute without much highway time between refuellings.  I can also explain why my fuel efficiency often beats government estimates (17 city, 24 hwy, 20 combined):  I almost always use premium fuel, as recommended.  But there’s a clear upward trend here.  Somehow, in the time I’ve had her, Maxine has become more efficient, and I definitely cannot explain that.  She manages 21.122 mpg overall (16.974 mpg lowest average and 26.409 mpg highest average) at $0.143 a mile in fuel costs.

Tori (my name for my parents’ Taurus station wagon from the same era), used regular fuel, but only managed 19.141 mpg (and $0.170 a mile in fuel) over the course of 5 refuellings (most of which were highway driving) during which I drove her.

Somehow, reality was opposite of expectation.  The “cheapest” car to drive is my luxury sports sedan Maxine, despite premium fuel costs and lower estimated efficiency ratings.

As a side note, the app I currently use for tracking such things is Drivvo (follow the link for images).  It is an incredibly beautiful Android app that is intuitive and feature-filled.  It is ad-supported unless you pay $5 a year (by the way, I fully endorse the use of an inexpensive yearly subscription model like this; it encourages app developers to continue supporting their work, unlike my last fuel app I paid for that got its last update in 2011).  It can track service done to your vehicles, what brands of gas you usually get, and even remind you when to renew your tags.  The company is Brazil-based, and some of the translation nuances are lost, but the app has a way to suggest your own translations.  This is something I’ve never seen in an app before, and it makes it incredibly easy to submit corrections.  I can’t tell you how much I appreciate that kind of developer intelligence.